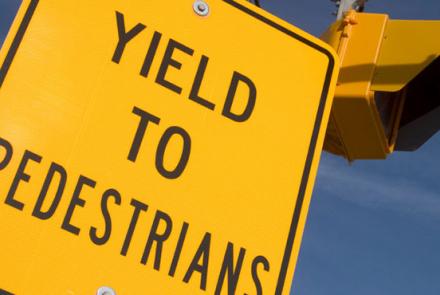 Meisel Law Group has been successfully representing and advancing the rights of pedestrian victims for over 30 years.  The firm has an extensive record of success in this regard, including: a 5.8-million-dollar award to a 78-year-old San Francisco resident; a 5.6-million-dollar verdict for a 70-year-old struck as he crossed a residential street in San Mateo County; a 3.6-million-dollar award for a seven-year-old child struck while crossing a San Francisco street with his brother and mother; and a 1.95-million-dollar arbitrator award in a wrongful death case involving a pedestrian who exited a bus and was then struck by a hit-and-run motorist.

In another case, a 56-year-old woman was struck crossing the street at the intersection of Alcosta and Broadmoor in the City of San Ramon.  Our client wanted to make sure this never happened to anyone else at this intersection, and as part of the case resolution, Meisel Law Group prevailed upon the City to install substantial safety enhancements to protect pedestrians at the intersection.

We have successfully handled many pedestrian cases where the police determined that the pedestrian was completely or partially at fault for causing the incident.  Our firm undertakes a thorough investigation, and we work with a team of experts to advance our client’s claims and maximizing the legal compensation to which our clients are entitled.