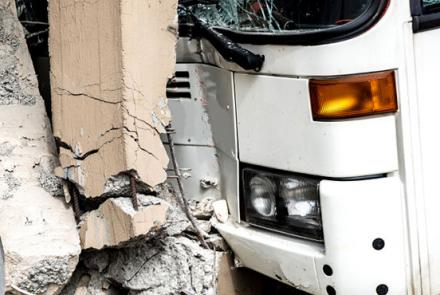 When a tour bus, school bus, public transit bus, or van is involved in an accident, there can be serious injuries or death to passengers on the bus, people in other vehicles, or innocent bystanders including pedestrians and bicyclists.  Many buses do not have seatbelts, worsening the outcome for those passengers on the bus.  Since buses and vans are large and heavy vehicles, a bus accident can cause much greater damage than an accident involving a passenger car.

Bus and van accidents are often caused by driver negligence, and there are special licensing and training requirements for bus and commercial van drivers that may have been violated.  Older equipment, poor maintenance, improper training, or defective components can cause an accident, as can dangerous roads or roadways under construction.  On a tour bus, many times visitors from other states or countries are injured—these clients need an attorney who can assist with the coordination of a wide variety of issues related to their out-of-state or out-of-country residence.

It is important for anyone involved in a bus or van accident to know their legal rights, and to be sure those rights are properly protected.  The attorneys at Meisel Law Group are experienced personal injury attorneys who have handled many bus and van accident cases including a tour bus, school bus, charter bus, and public transit bus.  The firm has also handled cases involving large and smaller passenger vans including commercial vans, passenger vans, and transit vans.  Our record of success is extensive—the firm recently obtained 3.57 million dollars for a seven-year-old struck by a transit van; 1.5 million dollars for a pedestrian struck by a public transportation bus; 1.5 million dollars for the family of an elderly male struck and killed by a school bus; and 1.4 million dollars for a woman whose car was struck by an airport transportation van.