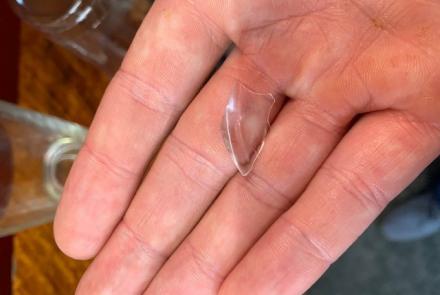 On September 11, 2019, G. Taylor, age 30, and a friend were at a social park where they purchased a pitcher of hazy IPA beer at SIP, operated by Tipsy Tap in San Francisco. Tipsy Tap provided the pitcher and two glasses. While G. Taylor was drinking the beer, he felt a foreign object in his mouth, which he spit out. It was a jagged piece of glass about the size of a dime.

He thought he might have swallowed a piece of glass but had no discomfort. He then attended the Eric Clapton concert at the nearby Chase Center. After the concert, G. Taylor went home and fell asleep. He woke after midnight in great pain in the chest area. Upon his arrival at the emergency room, it was determined he had ingested a jagged piece of glass similar in size and shape to the one he had spat out.

The glass lacerated his esophagus, requiring emergency removal of the glass and repair of the esophagus, and multiple follow up surgical procedures. G. Taylor was hospitalized for 8 days as a result. At the hospital a gastric feeding tube was surgically placed so he could receive nutrition through his stomach. During hospitalization, G. Taylor was in extreme pain, requiring increased morphine.

Mr. Taylor was dependent on the gastric feeding tube for nutrition for an entire month, resulting in a loss of 20 pounds. As a result of the trauma to the esophagus, scar tissue formed, narrowing the esophageal opening, and leading to dysphagia (or difficulty swallowing), requiring two additional surgical procedures to open the esophagus. Over time, the condition is expected to improve, with the potential of recurring dysphagia and the need for additional surgical procedures to open the esophagus in the future.

Andrew Meisel asserted claims against Tipsy Tap for negligence, res ipsa loquitor (California Evidence Code Section 646), and breach of warranty of fitness (California Commercial Code Section 2315). Tipsy Tap denied liability and claimed Mr. Taylor had made a very good recovery from his injuries. There was a dispute between the parties over the extent of future care Mr. Taylor required. Mr. Meisel retained an expert, specializing in Gastroenterology and Endosurgery, to opine on G. Taylor’s future care.

We have handled and won awards in thousands of other personal injury cases, many involving catastrophic injuries or death. Chances are good that we have already succeeded in a case like yours. If you or a loved one has been injured, or lost their life, contact Meisel Law Group for a free consultation to protect, enforce and prosecute your rights.