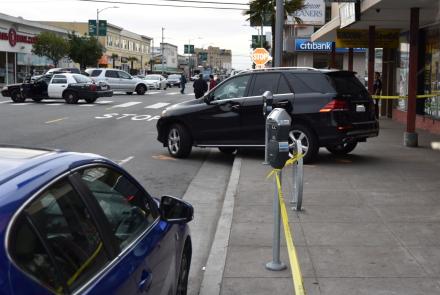 On December 21, 2019, L.K., a retired 72-year-old man was Christmas shopping with his wife on Irving Street in San Francisco when he was struck by a Mercedes Benz 350 GLE driven by George Chang. Mr. Chang was attempting to park his car at the curb when he reversed onto the sidewalk, striking L.K. and causing L.K.’s head to strike a storefront.

As a result, L.K. sustained a skull fracture, subdural hematoma, and traumatic brain injury. After successful craniectomy surgery (removal of a piece of the skull to allow for swelling of the brain) at San Francisco General Hospital, L.K. underwent rehabilitation at Kindred Transitional Care Center in Walnut Creek. Complications required hospitalization at John Muir Medical Center, at which time additional surgery was undertaken to replace the bone flap that had previously been removed from the skull. L.K. was ultimately discharged to a care facility near his home in San Francisco.

The case was handled by Andrew H Meisel and Donald E. Krentsa of Meisel Law Group in San Francisco. Suit was filed in San Francisco Superior Court (CGC-20-583214) on February 25, 2020. Due to the severe brain injury and age of the victim, Mr. Meisel filed a motion in the San Francisco Superior Court on June 16, 2020, asking the Court for a preferential trial date. The Court granted the Motion on July 16, 2020, ordering a trial date on November 2, 2020, which was subsequently continued to November 23, 2020.

Defendant Chang did not admit liability and contested the liability and damage claims throughout the litigation. Experts were retained by the respective parties – in all fourteen experts were named in disclosures. Medical exhibits, including imaging of the brain injury were prepared for trial presentation.

In October, 2020, Mr. Meisel served a CCP Section 998 Offer to Compromise in the amount of $9,001,000.00. This was accepted by George Chang, resulting in entry of judgment by the San Francisco Superior Court on December 15, 2020. Mr. Chang had an automobile liability policy limit of $500,000.00 with California State Automobile Association. CSAA paid the policy limit and collection efforts were initiated against George Chang for the balance of the judgment. By July, 2021, the full balance of the judgement was obtained.