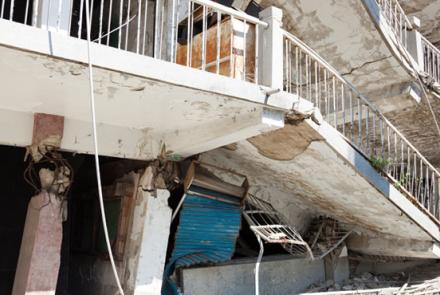 When an accident occurs on public or private property through the fault of the owner, occupier, or possessor of those premises, an injured person has a claim to be compensated for damages suffered.  These cases may occur in a wide variety of settings including retail stores, restaurants, bars, office buildings, warehouses, parking lots and other outdoor spaces, homes, apartments, public buildings, and parks.  Injuries may occur in many different ways, as for example falling objects; broken glass; building failure or collapse such as ceiling, roof, balcony, or deck; swimming pool accidents; and drownings.

In one such case, the firm represented Mr. Kwan, a 35-year-old painter who was injured when the “long arm” paint roller he was using to paint the façade of a building contacted the overhead electrical wires resulting in burns and electrocution to his arm and hands.  Reconstruction of the accident by experts retained by the law firm combined with legal research revealed the electrical overhead wires were closer to the building than allowed by law, causing the incident, and resulted in a settlement of $745,000.00 (Kwan v. Doe California Electrical Company).

In another case, the firm represented a family that was shopping at a big box store when a palate of product fell from a high storage shelf onto the family, injuring all five family members: father, mother, and three children.  A substantial settlement was obtained for the family upon a showing that the store had failed to properly secure the palate to the storage shelf on which the palate was resting.

The law firm has represented young children who fell through screened windows from the upper floors of buildings sustaining severe injury.  The screens presented an illusion of a secure barrier and a false sense of security, but in reality provided almost no resistance whatsoever to the children, who tragically fell through to the ground below sustaining significant injuries.

Recently, the Firm represented a woman and won an award of 1.875 million dollars when a large tree limb fell on her as she was walking to her car in a public park.  The law firm worked with an arborist expert and proved the City had pruned the tree improperly and ignored the danger.

In other cases, the firm has won substantial awards for a child who fell through a skylight, a man injured when a storage building collapsed upon him, a wrongful death case where a wall on a construction site collapsed, and for a man severely burned in an apartment fire.

These cases require an experienced attorney familiar with building codes, industry customs and practices, and access to a team of experts to support a finding that the client is entitled to recover maximum legal damages for their injuries or death.