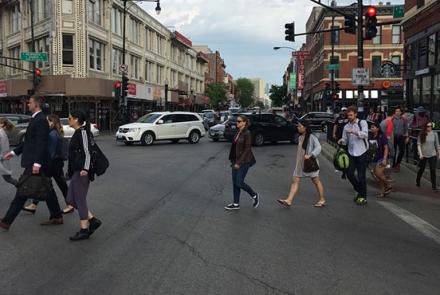 Attorneys at the Meisel Law Firm represented Bilan Kong, a 53-year-old woman who was struck by a motor vehicle on September 12, 2014, at approximately 8:00 p.m.  Mrs. Kong was in an unmarked pedestrian crosswalk and nearly half-way through the intersection when the crash occurred.

Mrs. Kong immigrated to the United States from China in 1985 when she was 25-years-old.  She worked for minimum wage as a seamstress in a garment factory and took English classes at San Francisco City College.  She married her husband in 1986, at which point she left her job in order to care for her family.  After having three children, Mrs. Kong re-entered the work force in 2001, working as an in-home care provider for the elderly and making minimum wage.

As a result of the collision, Mrs. Kong sustained a bimalleolar ankle fracture, a fibula fracture, and a mild Traumatic Brain Injury.  She was taken by ambulance to San Francisco General Hospital where she was admitted to the Trauma Unit.  The severity of the fractures to her ankle and leg required emergent surgery due to the risk the fracture would puncture through her skin.  Mrs. Kong underwent an open reduction internal fixation surgery with the placement of hardware.  She remained in-patient at San Francisco General Hospital overnight, after which she was transferred to Kaiser, and then to Saint Francis Heights Convalescent Facility.  She was discharged home a week later.  Mrs. Kong rehabilitated at home for more than a year.  Nine months after the incident, Mrs. Kong underwent a second surgery to remove the hardware in her leg.  At 15-months post-incident, Mrs. Kong remained functionally disabled.  While she ultimately recovered well, she sustained permanent loss of range of motion in her ankle, primarily with respect to dorsiflexion.

As Mrs. Kong convalesced at home, her family began to notice changes in her personality and cognitive function.  Due to cultural stigma associated with brain injury, Mrs. Kong denied and dismissed the symptoms for years.  After Mrs. Kong was deposed in early 2017, Attorneys at the Meisel Law Firm were finally able to convince Mrs. Kong of the need for her to undergo neuropsychological testing.  The evaluation revealed Mrs. Kong had sustained clinically significant permanent cognitive sequalae as a result of her head injury.

The defense vehemently denied Mrs. Kong had sustained permanent injury to her cognitive function, so much so that the defense retained a neuropsychologist, but opted to forgo conducting their own neuropsychological evaluation.  The defense also contested the extent and severity of Mrs. Kong’s ankle and leg injuries.