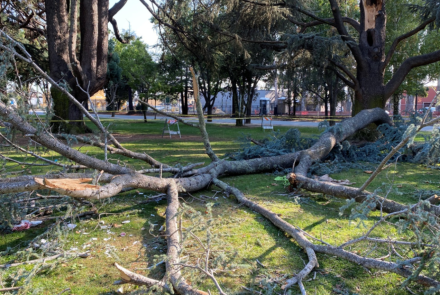 R.W. and Estate and Heirs of B.N. vs. City of Burlingame

September 26, 2020, was a beautiful late summer day – sunny and warm with barely a breeze. A group of friends gathered for a picnic at Washington Park in Burlingame, California, to celebrate a 30th birthday. The party was held outdoors due to the pandemic. The Park has a manicured lawn for picnicking beneath a canopy of beautiful, mature trees. Directly above was an overly mature Atlas Cedar tree with a sixty-foot long, three-thousand-pound branch that was in a dangerous condition. The branch failed and crashed down on the group. B.N., 29, was struck on her head and killed. Her husband, R.W., 30, suffered a complete spinal injury at T-6. Approximately seven others sustained lesser injuries.

Washington Park is owned and operated by City of Burlingame. Claimants made contentions that the tree and branch were in a dangerous condition, as described here. The branch that failed was the largest branch on the tree. It had bark inclusion, a progressive condition which weakens the structural connection between trunk and branch. Ultimately, the weight of the branch becomes more than the trunk can bear, resulting in the branch separating from the tree and crashing down to the ground. Warning signs were present but ignored. The tree had multiple prior branch failures over a period of years. Once branches of a tree begin to fail, other failures are more likely. The tree had been improperly pruned creating too much weight towards the end of the branch, worsening the weakened structural connection. The aspect ratio (ratio of size of trunk to size of branch) was too large and another warning sign. The branch was attached to the trunk at an acute angle, a condition indicative of a bark inclusion structural defect. In short, there were multiple, readily identifiable structural defects that went unheeded. The branch failure was foreseeable and avoidable.

Burlingame disputed liability, claiming they spent substantial annual resources caring for their trees and employed full-time arborists who regularly inspected the trees.  Mr. Meisel surmised that City of Burlingame would contend the bark inclusion defect was not observable from a ground inspection. As such, City of Burlingame’s liability defense would be that City had no notice of the structural defect, and thus no liability for the branch failure.

As part of the discovery obtained through the Public Records Act, Mr. Meisel discovered the tree in question was used to train Burlingame tree care employees. As part of their training, there were videos of Burlingame employees climbing the subject tree multiple times in the years preceding the incident, often climbing within proximity to the branch and trunk. While claimants contended the structural defects would have been observable from a ground inspection, the tree training videos showed Burlingame City tree care employees had an opportunity to visualize the defect in the tree, at the point of connection between the tree trunk and branch.

B.N., age 29, was tragically killed. Her heirs included her husband, parents, and brother. B.N. was a financial analyst, bright, energetic, caring, and loving. Her smile brightened the World. She and R.W. had been married two years and were planning to start a family. R.W. was also a financial analyst. B.N. was the love of his life. R.W. was independent, athletic, hard-working, kind, and dedicated. He helped care for his aging parents. B.N. and R.W. loved to travel. They had gone on many trips and had been scuba diving, hiking, skiing, and sky diving. The complete spinal injury at T-6 left R.W. permanently paralyzed from the mid-chest down.

Andrew H. Meisel of Meisel Law Group represented R.W. and the Estate and Heirs of B.N. A public entity claim was filed. A Complaint was prepared alleging dangerous condition (GC section 835), vicarious liability for negligent act of employee (GC section 815.2) and breach of mandatory duty (GC section 815.6). Before the Complaint was filed, Burlingame proposed a mediation which took place on May 12, 2021. The mediation did not result in a case settlement.

Burlingame maintained liability coverage of thirty-million-dollars, consisting of self-insured retention, POOL coverage, and five excess policies of five million each. Claimants demanded an amount above the policy limit. Burlingame contended the case did not have a policy limit value, and if it did, Burlingame would not agree to a settlement where City had to pay any amount over the policy limit.

Many attorneys are under the impression that only a demand within the policy limit can trigger bad faith potential. However, it is arguable bad faith is a possibility where there is a demand above the policy limit, so long as the insured is willing to pay the amount over the limit and so advises it’s insurers. Continental Cas. Co. v. United States Fid. Guar. Co. (N.D. Cal. 1981) 516 F. Supp. 384.

The insurance carriers agreed to tender the policy limit, and the case was settled for thirty-five million dollars in August 2021, less than one year after the incident. Mr. Meisel concluded the liability insurers and City of Burlingame agreed to the settlement given the potential for bad faith, and the substantial evidence presented demonstrating the reasonable value of the claims were in excess of the policy limit.