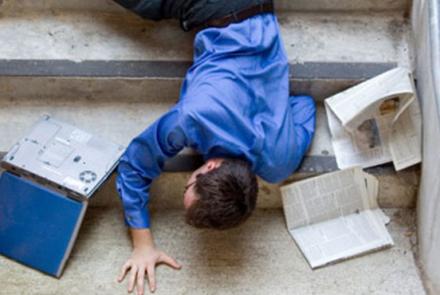 Falls are all too common, many times resulting in severe injury, including fractured bones, torn ligaments, deep lacerations, and head and spinal injuries. An experienced attorney understands the requirements of proving liability in this particular type of case, as for example the critical need to preserve evidence, including the scene, shoes worn and to look at other critical issues such as lighting, design and code violations.

When a person tumbles down a flight of stairs, trips over a hazard on the sidewalk or other pedestrian area, falls on a slippery surface, or falls because of any number of conditions that exist on property, it can be due to the negligence of a property owner, or someone hired by the property owner, like a contractor. It is very common for the owner to claim that fault is completely with the person who fell for being clumsy, or for not looking out for where they were going, or that the person fell should have seen and avoided a condition that was "open and obvious".

Meisel Law Group has extensive case experience in this area, and knows what is needed to give the injured person the best chance to win their case. The firm has handled hundreds of fall cases, from defective staircases, poorly constructed or faulty handrails, inadequate lighting, food or liquid left on the ground, and cracks in the sidewalks due to tree roots or other activities. The firm has represented clients who have been injured on property due to myriad other conditions such as broken glass, the failure to use safety glass, defective doors, objects falling onto shoppers, particularly at big box stores, falls from a roof, and so on.

In one such case, the firm represented Mr. Kwan, a 35 year old painter who was injured when the "long-arm" paint roller he was using to paint the façade of a building contacted the overhead electrical wires, resulting in burns and electrocution to his arm and hand. Reconstruction of the accident by the law firm combined with legal research revealed the electrical overhead wires were closer to the building than allowed by law, causing the accident, and resulted in a settlement of $745,000.00. (Kwan v Doe California Electrical Company)

In another case, the firm represented a family that was shopping at a big box store when a pallet of product fell from up high onto the family, injuring all five family members: Father, Mother and three children. A substantial settlement was obtained for the family upon a showing that the store had failed to properly secure the pallet to the storage shelf on which the pallet was resting.

It is important that your attorney is willing to go to court if needed to obtain you compensation for your injuries and damages. Meisel Law Group did just that in a case where a woman slipped and fell on sidewalk elevator doors made slick by rain water in San Francisco. The case was taken to an arbitration after the property owners insurance company denied liability and refused to pay compensation, and this resulted in an arbitrators award in favor of our client. (Lee v Kam Kee Corporation)